In the south of Sligo, near the border with North Roscommon, lies the wonderful Neolithic-infused landscape of Carrowkeel, or An Cheathrú Chaol in Irish (meaning ‘the Narrow Quarter’), in the Bricklieve Mountains.

Here among the hard limestone hills of the Bricklieves (derived from the Breac Sliabh, meaning ‘The Speckled Mountains’) you will find one of the largest concentrations of Neolithic passage tombs in Ireland, many among the country’s oldest, with monuments ranging from 5,000 to 5,800 years old, all of which predate the ancient Pyramids at Giza. 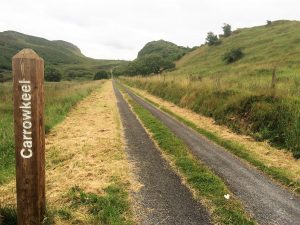 These passage tombs were constructed in the Neolithic period. This was the time of the first farmers in Ireland, when people began to clear the dense forests that covered the countryside to create fields for tillage and pasture.

The tombs were first excavated by Dublin-born, Cambridge-educated architect, R.A Stewart Macalister in 1911, who wrote:

“I lit three candles and stood awhile, to let my eyes accustom themselves to the dim light. There was everything, just as the last Bronze Age man (sic) had left it, three to four thousand years before. A light brownish dust covered all… There beads of stone, bone implements made from Red Deer antlers, and many fragments of much decayed pottery. On little raised recesses in the wall were flat stones, on which reposed the calcinated bones of young children.”

‘The whole area vibrates with echoes from our prehistoric past and is surrounded by scenic beauty in all directions.’

Macalister was the first human to enter these tombs in thousands of years so it must have been a profound experience for him. Despite his profession Macalister and his team did a lot of damage to the tombs during their excavations using sledgehammers and even dynamite to gain access.

On the main N4 road about 25Km from Sligo, as you head towards Boyle, at the village of Castlebaldwin you will see a brown road sign for Carrowkeel. Drive up the small winding road for a few kilometres and there is a turning sign-posted to the left. Thereupon you will see a small car park, information board and outdoor seating bench. Simply walk the small lane through the valley and take a left for Carrowkeel, the highest hill.

Most visitors to the complex will visit the four main cairns (another name for these tombs) on the plateau of Carrowkeel, there are others spread across the hills but these are the best kept and most accessible. On your way up to them you will pass by an unnamed ruined cairn.

The whole area is stunning, as you advance up the hill beautiful Lough Arrow comes into view. On a good day you can easily see Benbulben and Knocknarea (where Queen Maeve is said to be buried) from Carrowkeel. This limestone plateau is aligned with Knocknarea and cairns are on the hilltop. It is an easy enough climb up the path just a bit rugged closer to the top where there is blanket bog and limestone.

The passage tombs appear as large bright grey rock-strewn mounds. When Macalister and his team first began ‘investigating’ the tombs he assigned them letters. When you reach the top of Carrowkeel you will see Carin’s G and H in front of you. Both these tombs are still accessible, though a tight enough squeeze if you’re of a certain size or age.

What I find bizarre is that people are still allowed to go inside these tombs. There are also no ‘do not climb on top’ notices anywhere, which is not good given how old and precious these monuments are. If this were in the UK the National Trust would have them protected. So, please take care when entering and visiting them, they are ancient, and fragile enough. I have come across sheep droppings in them previously, so…

Cairn G has a similar entrance to the famous passage tomb at Newgrange in that it has a lightbox above the entrance, the only other passage tomb to have one. However, it is aligned with the sunset of the summer solstice rather than the dawn of the winter solstice like Newgrange.

Cairn G is believed to predate Newgrange by more than 700 years. It is a simpler structure than Newgrange with small passageway leading to a burial chamber and three seperate spaced side chambers. Macalister reported finding deposits of cremated human bone, beads from a necklace and shards of pottery.

After I crawled inside the main chamber is high enough for a tall adult to stand up in and using my light I surveyed the impressive structure. It is very well constructed and is as dry as a bone inside. This is a classic Irish passage tomb.

The walls are composed of eight well-matched stone slabs, or orthostats as they are called, and the chamber has an impressive arch-like or corbelled ceiling. The floor is covered with cairn rubble but was originally limestone flags I believe. It is a strange experience being in there and looking at the light coming through the entrance, it is hard to fathom how old these are in human years.

Next one up the hill is the partially damaged Carin H. Here Macalister gained access to it through the roof as the main passage was blocked. I did manage to crawl in some of the way.

This tomb is noticeable in that double-kerbing was use in its construction and some of these can be seen at the entrance.

The third main passage tomb, cairn K (see main image above) is accessible, again depending on your size and flexibility, through a narrow passageway. Cairn K was also has the classic cruciform shaped chamber and has an intact dry-stone corbelled roof, again there is room of adult humans to stand up inside. At the back of the right hand side chamber is an angled stone known as St Patrick’s Stone. The seven metre-long passage is orientated to Queen Maeve’s Cairn on the top of Knocknarea.

Macalister found deposits of cremated human remains under the flagged floor of the recesses in the chamber, and stone beads and pottery in Carin K. They also discovered a Bronze Age urn, which proved that these sites still held power and significance thousands of years after their construction in the previous Neolithic era, right up to the Bronze Age 2500 BC.

As you enter the steep limestone-walled valley from the car park you will see a large cairn (I think it is Cairn B) high up in front of you on the plateau to the right. There is no path to this structure so only try to access it where the incline is less steep, and if you are fairly fit and prepared for some scrambling, walking through bushes and deep vegetation. Some of the lands around here are marked as ‘private’, so beware of where you are going. You will need decent footwear too for this. This cairn can be clearly seen from the main sites on Carrowkeel as is it directly across the valley on the opposing plateau.

Behind the first Cairn G if you walk towards the edge of the hill facing Lough Arrow you will see another valley below and plateau opposite. This is the site of the one of earliest known Neolithic villages in Ireland situated in Mullaghfarna on a limestone plateau on the northern slopes of the Doonaveeragh ridge.

Here, archaeologist Dr Stefan Bergh with Anthony Corns and Robert Shaw of the Irish archaeological research unit The Discovery Programme carried out a high resolution survey of the area using digital photogrammetry and identified 153 hut sites and enclosures that probably indicate the homes of the people who constructed the tombs, a Neolithic village in the shadow of the mountains. These huts may have been inhabited by the people who built these passage tombs.

Also, behind Cairn G towards Lough Arrow you will see an oddly-shaped glacial erratic (remember these from your geography class??) known as ‘The Rocking Stone’, it makes for a good picture.

There is a cute Donkey Sanctuary on the road into Carrowkeel, if you fancy rubbing a wee ‘neddie with da velvet ears’ or an Ass as they are also called. Think they are the same thing?

Make sure to have the right footwear as parts of the trail near the top can become difficult especially when wet. As ever, pack for all the eventualities of Irish weather.

There are a lot of mountain sheep roaming the area and most are oblivious to humans.

The whole area vibrates with echoes from our prehistoric past surrounded by nature’s scenic beauty in all directions. That is what makes this place so special. Even if you are not interested in ancient history the sheer beauty and peace of the place will win you over. At most you will come across a few other walkers on any given day.

It is a fantastic place for walking, there are longer trails and hikes though the limestone valleys and up the hills. There is a longer ‘History Trail’ walk signposted before the Carrowkeel entrance too that you can take. This unique hard limestone blanket bog covered landscape is also home to a diverse array of flora and fauna and a joy to be in on a summer’s day, or any day really.

All images and photographs are © of The Tourist Czar 2016